Hitler Youth Kriessieger badge.  1938 dated Trade competition badge for HJ and DAF members.  Aged toned finish to front ring and eagle, enamel in the Off-White ring is excellent, the enamel in the HJ diamond has some missing in the top Red section.  On the back is a Flat pin and catch.  Marked G. BREHMER MARKNEUKIRCHEN.

SA Gruppe Hockland Wettkampfe Badge.  Tin material hollow stamped, this one is a clean example and in very nice shape.  Dated 1939 on the front, pin back and marked RZM KLOTZV.KIENAST MUNCHEN.

German DRL Sports Badge in Bronze. Badge shows very light wear. Third model (1937 onward) with the letters of the new monogram “DRL” and a swastika at the bottom of the wreath. The badge reverse is marked D.R.G.M. 35269 [Deutsches Reichsgebrauchsmuster] and “WERNSTEIN JENA”. The pin is flat. Nice example.

German WWII Kreigsmarine Naval Destroyer War Badge.  This medal has a Gold outer finish to the wreaths and is about 80%.  The center has the Destroyer in Gray.  On the reverse it has a round pin and catch, and is maker marked R.S.  Good example.

German WWII War Merit Medal first class with swords.  Nice example of the War Merit medal, Dull gray finish to the front and the back has the flat pin or "coke Bottle" pin with the makers stamp "L&S" in the middle.  Nice example. 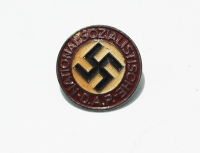 German WWII or Pre-war NSDAP Painted party pin.  Nice example of the standard party pin.  Painted version retains about 98% of its original paint.  The back is marked RZM M4/77 and the pin, nice painted example.

German WWI wound badge in Black.  Issue for WWI, this medal retains about %95 of its Black finish and is in nice condition.  Pin back and catch.

German WWII Kreigsmarine Minesweeper's wartime badge.  Gold outer finish with the inner of medal in Silver.  On the reverse, it has the flat or "coke" bottle style pin, the clasp for the pin is broken off, still hangs on a uniform fine.  Unmarked.

German WWI Iron Cross 1st class.  This medal is the vaulted style and has a flat pin back.  Front has the Crown "W" and 1914.  On the back its smooth silver finish and is stamped "800" silver.  Nice shows use and wear to finish.

German WWII Wound badge in Black.  Stamped steel with a black finish.  Some finish is worn on front, but features are crisp and not worn down.  On the back is the pin.  Nice.

NSDAP 1935 NATIONAL LABOR DAY COMMEMORATIVE BADGE.  Aluminium party badge worn on the lapel.  Sold or given at events to raise funds or to promote an NSDAP event.  Clean nice shape.  Says "TAG DER ARBEIT" on the front.  On the back its marked with the makers name and the pin.

NSDAP Party membership pin painted example.  This ones the painted version, and is worn.  There's paint missing from the front of the pin.  Rear of the pin is dirty, has the pin back and the RZM and makers number M1/34.

NSDAP Party membership pin.  Nice clean pin this ones Brass with a silver finish which is wearing a little.  Clean enamel to front, the back has the pin and is RZM and maker marker M1/163. 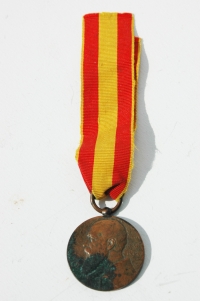 German Baden medal.  1902 Jubilee medal, its Bronze and has a stain on front, this might clean off.  Its was a award to Badeners for Military or Civil public service.  The medal was instituted in 1902 on the 50th anniversary of Grand Duke Friedrichs of Baden reign.  Double sided.  This is a medal complete with its original ribbon, this ribbon is often seen on WWI and WWII German  Medal bars or ribbon bars.

NSDAP Party membership pin.  This is a pianted example and shows some age.  Some paint is chipped off the front and light wear and light rust to the pin, but light.  RZM marked on back M1/1 and can't make out the rest.  Not mint but still a nice example.

German WWII Combat award Infantry Assault Badge.  Dull Silver/Gray finish is a cast example.  Nice details to the front, crisp.  On the reverse, it has the long pin but the catch is broken off, still will hang on a tunic, but wont clasp.  No markings.

Kaiser Wilhelm I Medal.  Large circular gilt bronze medal with loop for ribbon suspension; the face with a head and shoulders portrait of Kaiser Wilhelm I in full military uniform facing right, inscribed ‘WILHELM DER GROSSE DEUTSCHER KAISER’ (Wilhelm the Great German Emperor) and ‘KOENIG VON PREUSSEN’ (King of Prussia); the reverse inscribed ‘ZUM ANDENKEN AN DER HUNDERSTEN GEBURTSTAG DES GROSSEN KAISERS WILHELM I 1797 - 22 MAERZ - 1897’ (In commemoration of the hundredth birthday of the great Kaiser Wilhelm I 1797 - 22 March - 1897) above a cushion bearing the Prussian (Hohenzollern) crown and orb imposed on a sword, a laurel branch to the left, an oak branch to the right. The medal was awarded on 22 March 1897, the hundredth birthday of Kaiser Wilhelm I, to all military on active service and to the veterans of the wars of 1864, 1866 and 1870. It was made from Danish, Austrian and French cannon captured in those wars, designed by the artist Walter Schott (1861-1938) and produced by the Berlin medallists Firma L. Ostermann, founded in 1812 by Gottfried Bernhard Loos (1774-1843). Kaiser Wilhelm I (1797-1888) became King of Prussia in 1861 and Emperor of a united Germany on 18 January 1871. His reign was most notable for the unification of Germany under the guidance of Otto von Bismarck and its rapid industrial and economic progress. A good example. No ribbon.

German DRL Sports badge in Bronze.  Bronze color badge has some finish wear in a few spots on the front.  Back has the flat pin and hinge, with the thick round catch.  Badge is marked PFORZHEIM  and FRITZ KOHM on the other side back.  Nice example and a maker not often seen.

Eastern peoples award in bronze without swords.  This is the bronze award, its clean and has the original ribbon in green.  Front sided only, unmarked back.  Dies struck and made of a zinc alloy.  Awarded to volunteers from the Eastern countries for the war effort working for the Germans.

monogram “DRL” and a swastika at the bottom of the wreath. The badge reverse is marked D.R.G.M. 35269 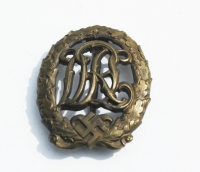 German DRL Sports Badge in Bronze. There is just light wear. Third model (1937 onward) with the letters of the new monogram “DRL” and a swastika at the bottom of the wreath. The badge reverse is marked D.R.G.M. 35269 [Deutsches Reichsgebrauchsmuster] and “WERNSTEIN JENA”. The pin is flat. Nice example.

German WWII Unissued ribbon bar ribbon.  Its two ribbons together, the Iron Cross 2nd class, and the Eastern Front Medal ribbon, paired together. The strip is about 8 inches long which of course would do about ten ribbon bars!

No items in cart
View Cart