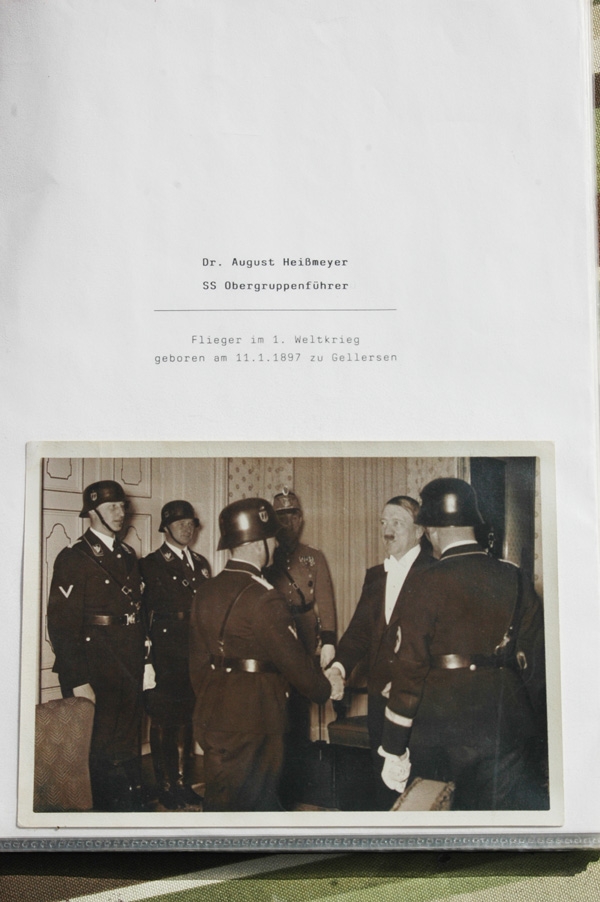 Rare photgraph and document grouping to SS-Obergruppenfuhrer August Heissmeyer.  This grouping consist of many photographs and documents, award letters that came from August Heissmeyers estate.  All are nicely done is a folder to protect them, Each item is documented.  The front page is an original large size (7X5) inch photo of Heissmeyer with Hitler and Himmler dated 1938.  The next few pages are photographs of Heissmeyer during WWI with fellow soldiers.  Next are documents and more photos of him and a Korps-Tagesbefehl order from 1918.  One of the WWI photos of Heissmeyer and friends with there signatures.  Next, a photo of heissmeyer with his plane, and his officers card.  An award document date 1918, an Ausweis and award document, then two pages of award documents for the Iron Cross 1st and 2nd class.  A studio photograph (9X6) inches, a dated award appears early 1930's issued for WWI.  Two more documents on the last two pages.

This grouping came with all of SS-Obergruppenfuhrer August Heissmeyers uniforms, awards and other property from his estate many years ago.  The uniforms and awards have since sold and all that remains is this grouping.  A Rare grouping to an Important SS General.